Damn. Hate to admit it, but I'm beginning to think Hoffman was right.
They let things get too lax and it cost them.
— Sharice

Sharice is one of the two new playable Cleaners in Back 4 Blood who got introduced with Tunnels of Terror, the first expansion that has been released on April, 12th 2022.

From fighting fires to fighting Ridden, Sharice knows how to keep her cool in the heat of battle. At an early age, Sharice’s father taught her the importance of community and the value of helping neighbors. He lived and died by those words, meeting a tragic end after attempting to save victims trapped in a burning building. Determined to honor his legacy, she graduated from the local fire academy with top marks, and joined Evansburg’s most prestigious force, Engine 12. After the Collapse, she and her crew fought the Ridden until only she was left alive. Now, she’s joined a new crew, The Cleaners, and pledges to fight the Ridden till every last one of them is snuffed out.[1]

The following traits are being granted to Sharice with her Cleaners card:

STUNNER
Starts with a Flash Bang

In the developer diary "Creating a Cleaner", Senior Character Artist Alex Boatman gives an insight into the creative process of creating a cleaner such as Sharice. For more information please visit the official dev diary post[2].

Sharice moved to Evansburgh when she was fairly young after a fire started in their building and her family lost everything, including her father. He taught her the importance of community and the value of helping neighbors, words he lived and died by having tragically died trying to save others.

And so to honor his legacy, Sharice graduated from the local fire academy with top marks, and joined Evansburgh’s most prestigious force, Engine 12. Entering a male dominated service as a woman, especially a woman of color, was difficult at first. Hard work and grit earned her the respect of her colleagues and eventually she was promoted to Lieutenant.

After The Collapse, she and her crew fought the Ridden until only she was left alive. Now, she’s joined a new crew, The Cleaners, and pledges to fight the Ridden til every last one of them is snuffed out.

With this I basically determined that she’s a natural born leader, which would require her to be stern and demanding with a strong mental toughness. She’s gonna call you on your shit, but she won’t give up on you.


Personality traits are something I like to try to express in the shape of a model, and especially a character’s face.
We wanted her to also be in her early thirties and physically fit from her profession, but not a lean fit, more stocky.
And for her main outfit to be a mix of firefighter gear mixed with civilian clothing.

I was also interested in adding some personal flair, and so I went to our Head Writer at the time and asked for some more tidbits about Sharice and I learned she’d grown close to Karlee.

And so I put the same band logo that Karlee has on her shirt onto a pin on Sharice’s backpack. I enjoy the little things sometimes and I like to think maybe Karlee gave her the pin.
— Alex Boatman, Senior Character Artist at Turtle Rock Studios

I was fighting for Evansburgh long before the Collapse. Granted I fought fires and not worm-infested freaks, but a fire axe comes in handy either way.

Ran with a different squad back then. Johannes, Garcia, Miller, and me–Engine 12’s finest. We were like family. Faced some of my toughest battles with them.

I'll never forget when I first saw the world go to shit. I was a first responder on the front lines, racing toward downtown to contain a kitchen fire gone awry. By the time we arrived, the complex was mostly ash. No way there were any survivors. While wading through the smoldering debris, I saw something move. Got my hopes up, ‘cause when we got closer we saw it was alive. But it wasn’t human though, not anymore. First time I saved someone by killing them.

We pledged to stick together, to keep helping people. Wherever we went, Ridden fell and didn’t come back. Our last run though? Different story. While we were out there we saw something new and covered in spines. Decided to follow it into one of those tunnels that’ve started popping up more and more. Got surrounded and… needless to say, I did what I had to do. I can still hear their screams.

Found myself getting picked up by Phillips soon after it all went down and brought to Hope. A home for survivors; for fighters. After the shit I've seen, I know I'll be fighting the Ridden till my very last breath.
— Sharice's journal 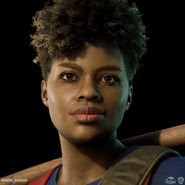 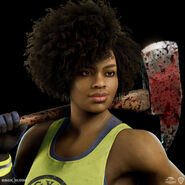 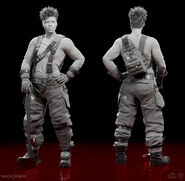 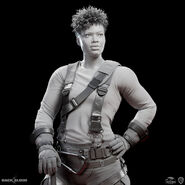 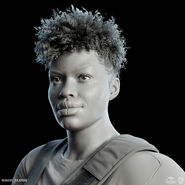 Trait overview from the "Back 4 Blood - "Tunnels of Terror" Launch Trailer. 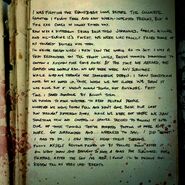 The following overview presents all cosmetic items that are associated with Sharice.

Playing With Fire
How to unlock:
Accomplishments: 250 Missions as Sharice 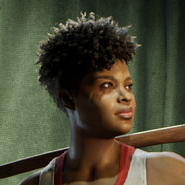 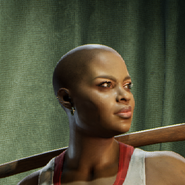 Buzzed Beauty
How to unlock:
Roving Merchants for 150 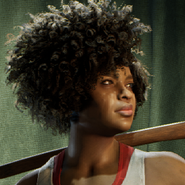 Get It Twisted
How to unlock:
Roving Merchants for 150 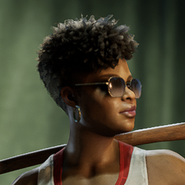 Glitz
How to unlock:
Roving Merchants for 200

Gym Rat
How to unlock:
Roving Merchants for 150

Bengal Belle
How to unlock:
Roving Merchants for 150

Fired Up
How to unlock:
Roving Merchants for 150

Smoldering
How to unlock:
Roving Merchants for 150

Daring Denim
How to unlock:
Roving Merchants for 150

Sharice
How to unlock:
Roving Merchants for 125

From The Ashes
How to unlock:
Roving Merchants for 125 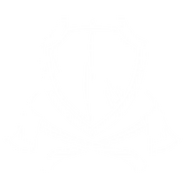 Crossed Irons
How to unlock:
Accomplishments: 25 Missions as Sharice 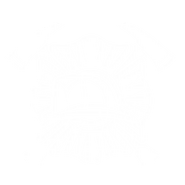 Heroic Heraldry
How to unlock:
Accomplishments: 50 Missions as Sharice 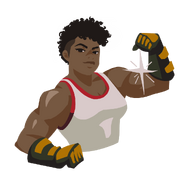 Flex
How to unlock:
Accomplishments: 100 Missions as Sharice 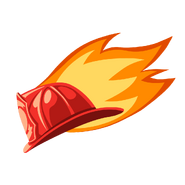 Firepower
How to unlock:
Roving Merchants for 100