It's really dangerous and I could possibly die? Well, sign me up!
— Holly

Holly is one of the ten playable Cleaners in Back 4 Blood. She is an enthusiastic fun-lover who is accompanied by her baseball bat, Dottie, as she battles the Ridden alongside her team.

After losing her family to the Devil Worm, Holly Forrester learned to channel all her energy into being a Cleaner and is known as the glue that keeps the team together. Armed with her trusty nail spiked baseball bat she affectionately calls "Dottie", Holly's resilience and never-say-die attitude helps boost the team's morale and is often seen as a ray of light in the darkness of the apocalypse.[1]

The following traits are being granted to Holly with her Cleaners card:

GRAND SLAM
Holly recovers 1 Health when she kills a Ridden.

SELF DEFENSE
Start with a Stun Gun

Holly is a young redheaded woman. She wears a blue baseball cap, elbow pads, and a yellow sports shirt with a red checkered flannel shirt tied around her waist, short jean shorts with ripped stockings underneath, cyan sneakers with yellow socks, and a blue backpack with various pins.

Holly is a caring, risk-taking, fun-loving young woman. She enjoys giving the Ridden a severe beating with her baseball bat that she named Dottie. She tends to have fun when fighting off the the Ridden, often asking Dottie if she's ready to give the the Ridden a beating or asking her teammates if they are keeping score. She enjoys the company of her teammates and help them when the time comes. Much like Evangelo, she likes positive things and tries to make the best of bad situations. She takes great pride in consistently verbally abusing Hoffman.

The following quotes are shortened versions of the comments they've made about Evangelo's character:

Holly's one of the characters that actually Phil came up with the premise for holly and she's athletic and outgoing. I want someone who's kind of really "In your face" about things personality-wise to match that "I'm not keeping up; I'm out there doing my own thing."
The baseball bat became a thing when I wrote it and talked about things and they put it in as her main kind of weapon.
— Simon Mackenzie, Lead Writer at Turtle Rock Studios

Initially, with her being athletic I imagined her playing softball in high school and college so the bat just worked.
Holly is my favorite character. She's like the eternal optimist, unflappable and looking at the bright side of things.
She has a tendency to take the piss out of the other characters.
— Phil Robb, Co-Founder/Creative Director at Turtle Rock Studios

She is that kind of glue [of the team] and I think she feels that role for the team.
But it's one thing I think with all the characters is that they are in this fight to win it. This isn't this grim where they're kind of ground down and they've got hope and they're pushing forward and that's almost exemplified in Holly.
— Simon Mackenzie, Lead Writer at Turtle Rock Studios

Holly went through a bunch of iterations as we had different ideas of what her civilian pas life was.
She started as more literal softball design which was Phil's initial concept.
— Gue Yang, Character Concept Artist

Some people seem to be born knowing what they're going to do in life. I was almost done with college & still didn't have a clue. I suppose I found my calling after everything went to shit as bad ass slaying...Ridden. I'll correct myself now before I get the lecture from Doc, or worse, Hoffman. The difference, Ridden are still alive, gross right? I suppose that's why we make up names for them. Be hard to do what we do if we still considered them neighbors or family...I lost mine in the Collapse. Doesn't make me special, there's nobody that didn't lose someone. But I've got Dottie, my bat, and of course I suppose there's the other Cleaners. Speaking of which, it's probably time to go save their asses again.

Huh, what do you know this did help, thanks Doc.
— Holly's journal 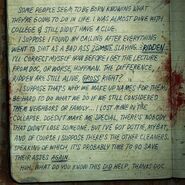 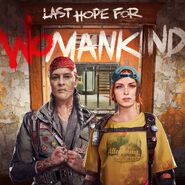 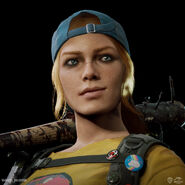 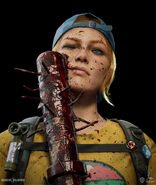 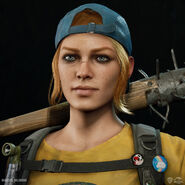 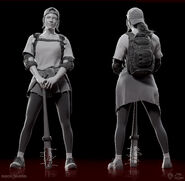 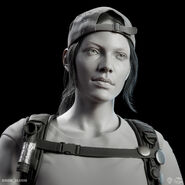 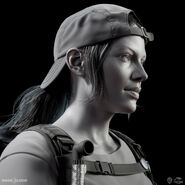 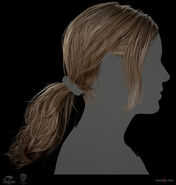 Sketch made by Gue Yang.

The following overview presents all cosmetic items that are associated with Holly.

Plucky In Pink
How to unlock:
Accomplishments: 250 Missions as Holly

ZWAT
How to unlock:
Accomplishments: Complete all Campaign maps on Nightmare as Holly

No Mercy
How to unlock:
The Collectors for 13

Quark-Y
How to unlock:
Own the Tunnels of Terror DLC expansion. 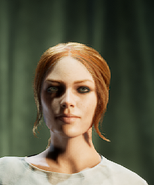 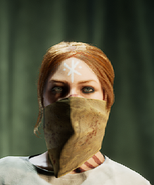 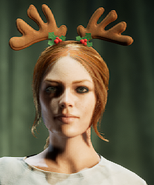 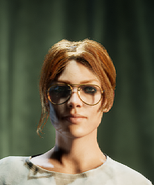 Aviator
How to unlock:
The Collectors for 7 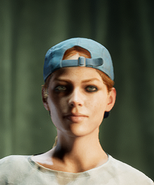 Buzz Off!
How to unlock:
Roving Merchants for 200 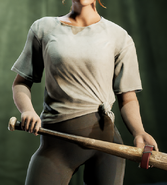 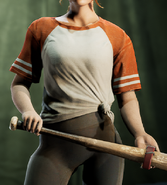 Softball Star
How to unlock:
Fort Hope (2) for 5 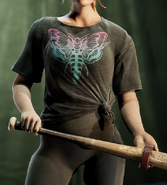 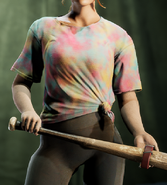 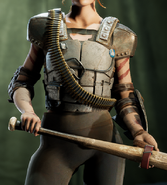 Wing And A Prayer
How to unlock:
KSC Convoy for 100

B Positive
How to unlock:
The Collectors for 5 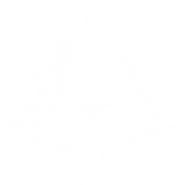 Little Seeds
How to unlock:
Accomplishments: 25 Missions as Holly 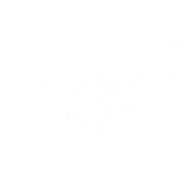 Night Owl
How to unlock:
Accomplishments: 50 Missions as Holly 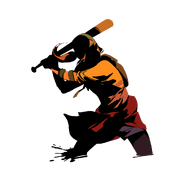 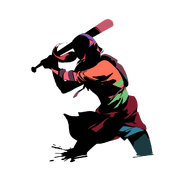 Out To Bat (Alternative)
How to unlock:
Knuckle House (5) for 15 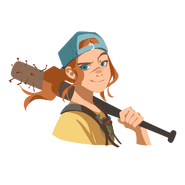 Holly
How to unlock:
Accomplishments: 100 Missions as Holly 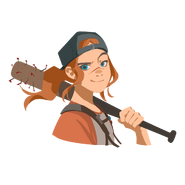 Holly#2
How to unlock:
Accomplishments: 100 Missions as Holly 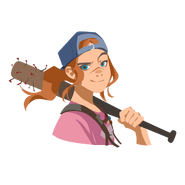 Holly#3
How to unlock:
Accomplishments: 100 Missions as Holly 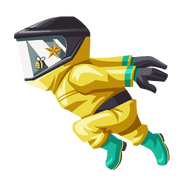 Beeline
How to unlock:
The Collectors for 3