Today's not the day for dying... I mean, yesterday we came close, but hey, here we are!
— Evangelo

Evangelo is one of the eight playable Cleaners in Back 4 Blood. He is one of the newer members of the team who has quickly become accustomed to his new life in the post-Collapse world.

He may be the youngest and least experienced Cleaner on the team but has proven to be a quick study. Besides being good in a fight, Evangelo has established himself as a loyal and reliable member of the team. He tends to talk a lot, especially when he’s nervous, but is eager to show that he has what it takes to be a Cleaner.[1]

The following traits are being granted to Evangelo with his Cleaners card:

BORN SURVIVOR
Evangelo can break out of grabs.
+ 75% Breakout Speed

FIRESTARTER
Start with a Molotov

Evangelo has curly hair and wears goggles on his head. He wears a yellow backpack, a blue leather jacket and a grey hoodie under it, while wearing a chain with a cross on it. He is wearing a white T-Shirt underneath and has camouflage colored pants, along with red and black shoes.

Evangelo despises the Ridden, probably more than his fellow allies do. He shows a deep admiration towards his hoodie, as every time blood or other infectious liquids make contact with it, he complains. He prefers positivity over anything negative and enjoys anything good that his team comes across.

The following quotes are shortened versions of the comments they've made about Evangelo's character:

Starting off: He's the youngest member of the team.

When it came to writing them he was also the lens I wanted to tell the story because he's new, he hasn't been a Cleaner before and it starts as his first mission. So you see the world expand through Evangelo's eyes.

He's a good entry point if players want go like "What is this world?".
— Simon Mackenzie, Lead Writer at Turtle Rock Studios

I think Evangelo is good for a player that doesn't feel like hanging as close to the team.
His special ability is he can get out of grabs, so if you get grabbed by a Ridden he can get out by himself.

He's also a fun character.
He has a lot of fun lines and stuff so you get to hear more of the humor (dialogues) than more of the serious characters.
— Phil Robb, Co-Founder/Creative Director at Turtle Rock Studios

He's lighter and brighter. He wants to prove himself ot the team.
So he's very forward facing even when he's kind of afraid he's gonna like
"Hey, I'm not gonna show it. I don't wanna let these guys down."
— Simon Mackenzie, Lead Writer at Turtle Rock Studios

Evangelo's design was a short lived one fortunately but had a lot of color explorations.
I believe this was when Simon came on as writer for more backstory of the Cleaners as well :)
— Gue Yang, Character Concept Artist 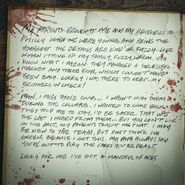 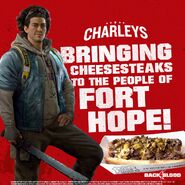 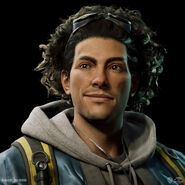 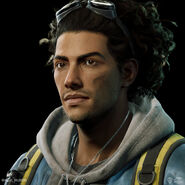 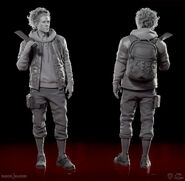 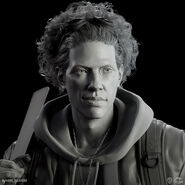 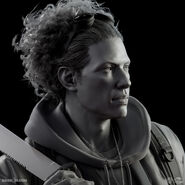 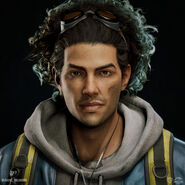 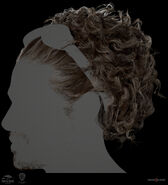